Technical debt doesn’t appear in neat, labelled units. It builds up slowly, insidiously—especially in machine learning systems. It starts as a feeling. Features become hard to implement because of complicated interactions and dependencies. Re-training and deploying your classifiers becomes increasingly tedious. And when you do become aware of technical debt, you’re not always in the right state of mind to start writing a list or to plan how to fix the thing.

So, to notice technical debt early, I look for it as part of a periodic review, and I use a trigger list for this.1 It’s based off of this paper (Hidden Technical Debt in Machine Learning Systems) and my personal experience. I’m not going to describe what all of these triggers mean. They don’t even have to mean the same thing to you as they do to me. But, this list helps me to recognize and itemize the technical debt in my machine learning systems.

1. Every good productivity or planning system includes something like a weekly review. These reviews let me be sure of my direction as I navigate each week. They also clear my head so that I am free to just focus, relax, or do nothing, without any worry that there is anything else I should be doing. I’ve found this trigger list to be useful during these weekly reviews.

2. “Features” here means features, or variables, or covariates, in a model.

Over the past two weeks, I’ve been teaching myself TensorFlow, Google’s open source library for deep neural network (actually, graph computation in general).

It was so easy to get started with TensorFlow that I was fooled into thinking I’d be writing an character-based recurrent-neural-network language model in a couple of days.

The TensorFlow website gives a few learning paths: Get Started, Programmer’s Guide, and Tutorials. These were written for various versions of the API and they don’t use consistent idioms or up-to-date functions. Regardless, I found these useful to go through to give me a sense of what it would be like to use TensorFlow.

After going through a few tutorials, I made the following learning plan and now feel comfortable defining and training non-distributed models in TensorFlow:

The MonitoredTrainingSession is very helpful. It initializes variables, watches for stopping criteria, saves checkpoints and summaries, restarts from checkpoint files if training gets interrupted.

My first real TensorFlow model was a char-rnn (used to model text by predicting the next character based on the previous sequence of characters). The part of the TensorFlow API that deals with recursive neural networks has changed a lot over the past year, so various examples you’ll find online present different ways of doing things.

My main point is: don’t assume you’ve misunderstood something when you can’t reconcile two different examples that claim to demonstrate the same thing. It’s likely just an API change.

My own example is here. It’s not perfect either. I’m not passing state from the end of one batch to the beginning of the next batch, so this isn’t standard truncated back-propagation through time. But, the dataset I’m learning on doesn’t appear to have dependences that are longer than the length that I chose for input sequences. R2RT discusses the distinctions between a couple of different styles of back-propagation through time. The approach I ended up implementing is almost what R2RT is calling “TensorFlow style”.

Further, wasn’t thinking ahead to how I would load the trained weights for sampling when I wrote the training script. Instead, I redefined parts of the model structure in my sampling script. This is not good. A better approach is to define the graph structure in a class (like in this example). This lets you use the exact same model during evaluation/sampling as was used during training, which is important for matching the saved weights to their variables based on their keys (names).

If you’ve already been using TensorFlow for some time, I’d appreciate any feedback you have for me on my early TensorFlow code that I’ve posted on GitHub. Are there TensorFlow design patterns I’m missing, or helper functions I don’t know about? Let me know!

Evaluation of an information retrieval system (a search engine, for example) generally focuses on two things:
1. How relevant are the retrieved results? (precision)
2. Did the system retrieve many of the truly relevant documents? (recall)

Suppose you have an image collection consisting of airplanes and geese. 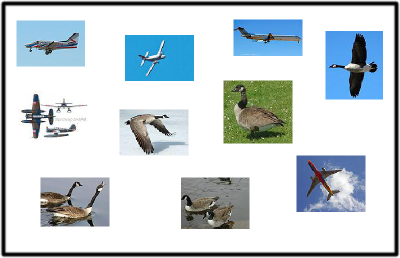 Now, you’ll be able to understand more exactly what precision and recall are.

Precision is the percentage true positives in the retrieved results. That is:

where n is equal to the total number of images retrieved (tp + fp).

Recall is the percentage of the airplanes that the system retrieves. That is:

What if we’re not happy with that performance? We could ask the system to return more examples. This would be done be relaxing our threshold of what we want our system to consider as an airplane. We could also ask our system to be more strict, and return fewer examples. In our example so far, the system retrieved four examples. That corresponds to a particular threshold (shown below by a blue line). The system retrieved the examples that appeared more airplane-like than that threshold.

A good way to characterize the performance of a classifier is to look at how precision and recall change as you change the threshold. A good classifier will be good at ranking actual airplane images near the top of the list, and be able to retrieve a lot of airplane images before retrieving any geese: its precision will stay high as recall increases. A poor classifier will have to take a large hit in precision to get higher recall. Usually, a publication will present a precision-recall curve to show how this tradeoff looks for their classifier. This is a plot of precision p as a function of recall r.

Rather than comparing curves, its sometimes useful to have a single number that characterizes the performance of a classifier. A common metric is the average precision. This can actually mean one of several things.

Strictly, the average precision is precision averaged across all values of recall between 0 and 1:

That’s equal to taking the area under the curve. In practice, the integral is closely approximated by a sum over the precisions at every possible threshold value, multiplied by the change in recall:

where N is the total number of images in the collection, P(k) is the precision at a cutoff of k images, and delta r(k) is the change in recall that happened between cutoff k-1 and cutoff k.

Notice that the points at which the recall doesn’t change don’t contribute to this sum (in the graph, these points are on the vertical sections of the plot, where it’s dropping straight down). This makes sense, because since we’re computing the area under the curve, those sections of the curve aren’t adding any area.

Precision and recall are useful metrics for evaluating the performance of a classifier.

Precision and recall vary with the strictness of your classifier’s threshold.

There are several ways to summarize the precision-recall curve with a single number called average precision; be sure you’re using the same metric as the previous work that you’re comparing with.